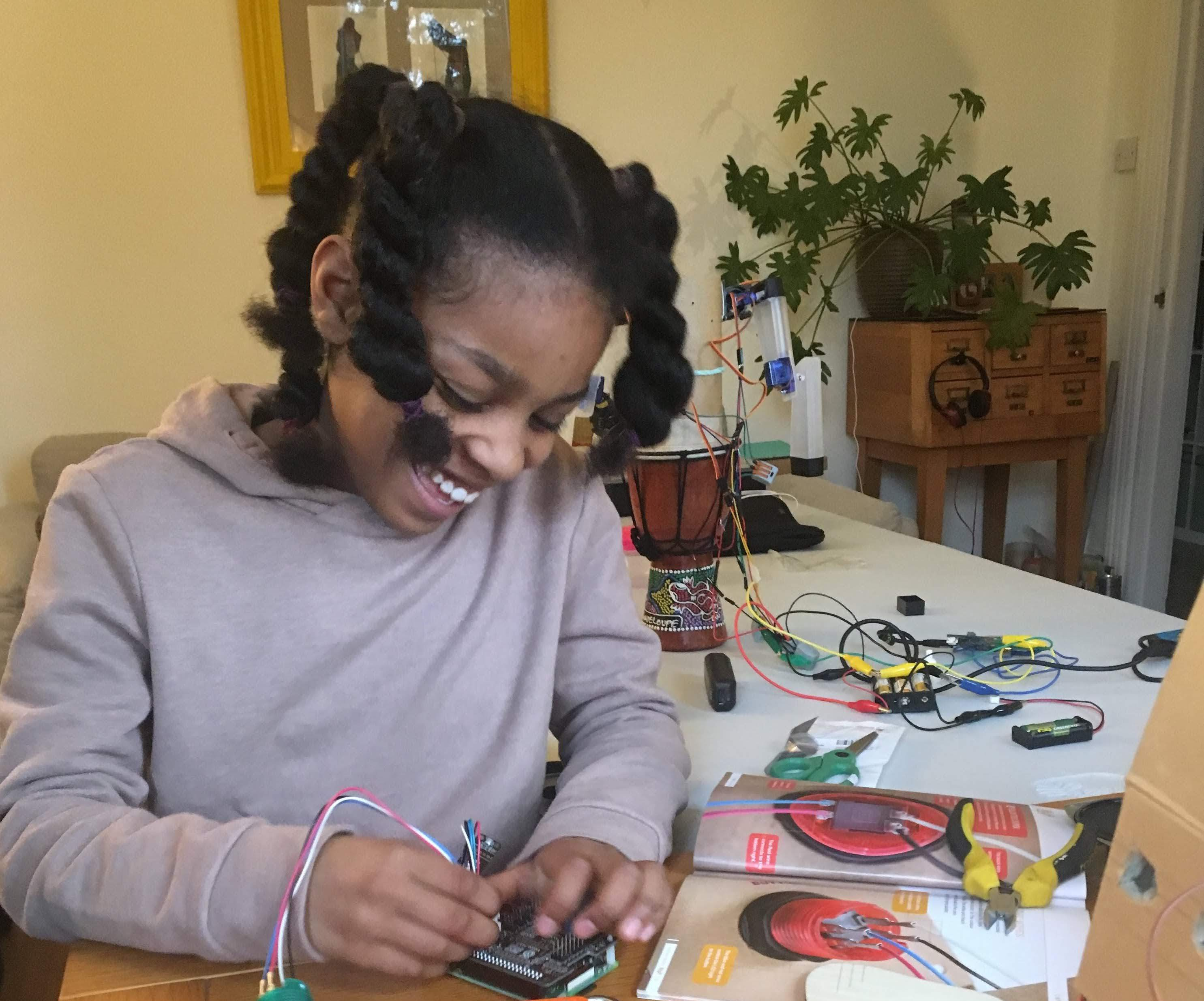 Avye is not your average 11-year-old. Her love for coding and making was sparked when she was only seven, and since then she's not looked back. She spends most of her weekends attending a code group and even runs her own workshops to teach people coding and robotics.

But Avye's work doesn't stop there. She's aware of the gender imbalance in STEAM, and she's determined to change that, one workshop at a time. This summer she reached her crowdfunding campaign target to fund her Girls Into Coding events, where girls are able to explore coding and physical computing using the Raspberry Pi and the BBC Micro: bit.

Who better to kick off our 'Meet The Maker' series than this impressive and passionate girl, ready to change the world.

You started coding at a very young age. What made you get into coding and making?

I attended a coding class when I was seven. It was fun and I enjoyed it! Soon after, I began going to the Raspberry Pi Jams and then to different CoderDojos in London. I now run regular workshops for CoderDojo at Kingston University and organise my own coding events to encourage more girl involvement in tech.

What have you made most recently?

Earlier this year I made a voice command robot – the Voice ‘O’tronik Bot, and its companion Tiny Tech. I entered it for the Coolest projects UK competition and it won first place in the hardware category.

It uses a Raspberry Pi 3 with the Google Cloud Speech API,  programmed using Python. The Voice ‘O’tronik Bot responds to four to commands, “roll eyes”, “open mouth”, “move arms” and “wave arms”. I recently demonstrated it at the Maker Faire in Rome and it was fantastic to see the reaction on peoples’ faces when they saw it spring into action. 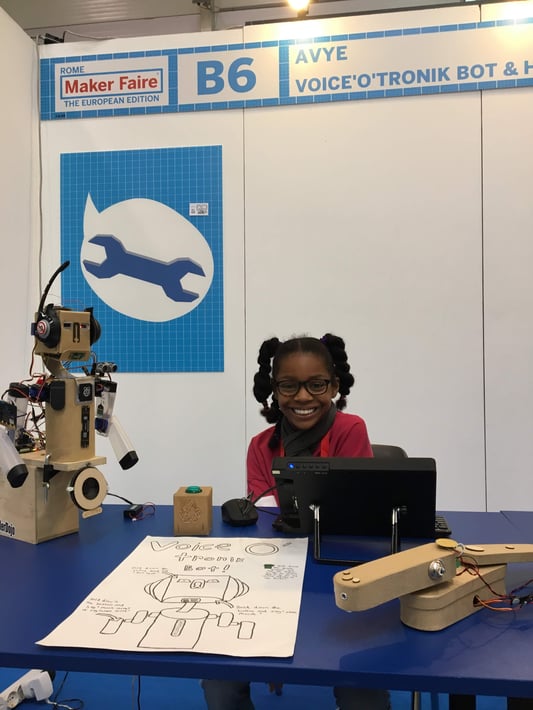 What does making mean to you?

I love making stuff; it gives me a chance to be creative and resourceful. I particularly like using upcycled objects to build my robots. It’s great the way an old tin or some packaging can be given a new lease of life when used with some technology. I also like physical computing because you get to handle different components. The things that I make and projects that I have worked on have given me opportunities to experiment, invent, discover, share, network, collaborate, challenge myself and grow.

What’s the first project or invention you ever worked on?

The first project/invention I worked on was a time machine/spaceship that I made with my dad. It ended up being quite big, so I wasn't able to keep it for as long as I would have liked to.

You won the ‘best working device’ for the Micro: bit 1st Birthday Challenge. Can you tell us a bit more about this project?

I made a balloon waving birthday robot for this project. The body was made from an empty coffee tin and I removed the branding with sandpaper. Its arms and legs were made out of cardboard tubes. The hands were just a pair of metal clips which could grip. The shoulders were made from two metal bracket type things which were left over from an old shelving kit. I attached a servo to the left shoulder to move the arm up and down and wave a bunch of balloons.  The birthday bot was coded to play the happy birthday tune and then say “happy birthday Microbit”. It was really fun to make and I used screws and a lot of hot glue to hold it all together. I used two micro:bits for this project, one coded with java blocks and the other ran python code. 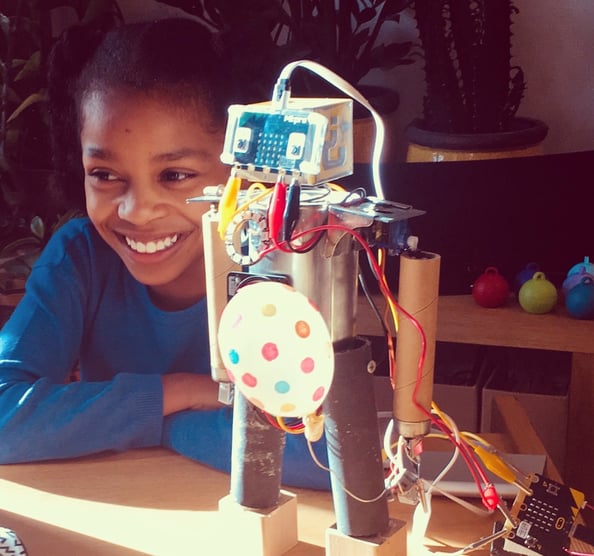 Have you ever had a tough time with a project and how did you end up working through it?

I have had several difficult moments with projects. When I’m stuck or just don’t understand something, there’s always someone from the tech and digital making community that is willing to help - it’s a really great network.

Can you describe your maker space?

My maker space is made up of two long workbenches, two high but comfy stools (so there’s always room for someone else to join in) and two adjustable lamps in case it starts getting dark.  It’s actually an inviting little area just to have a sit down in when I get back from school. There is always a range of different projects on the workbenches so I can choose which one I feel like doing. I think it’s important to have an area or place that you can go to and do the things you like. 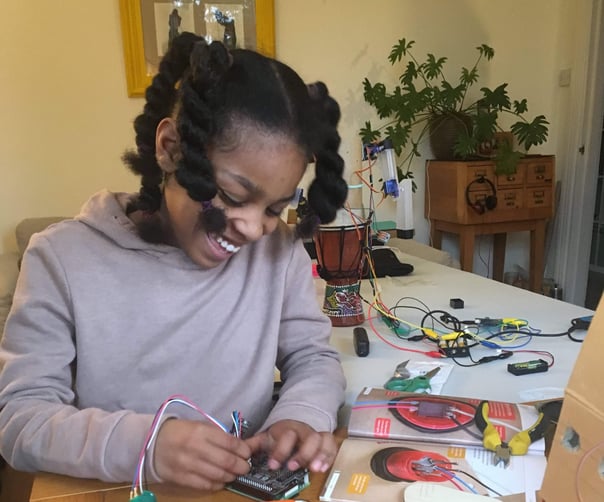 Do you have a person that inspires you to make?

There are lots of people that continue to inspire me. Sometimes it’s their ideas, their determination, their passion, their drive, their energy, their mission, their entrepreneurialism, their attitude, their definiteness of purpose or their courage.

Why do you think it’s important to organise events such as ‘Girls into Coding’?

Girls and women are underrepresented in STEAM education and careers. Events like ‘Girls into Coding’ can empower girls to explore STEAM activities, and help them to become more familiar with and comfortable in tech environments. I believe that this type of event can encourage more girl involvement in tech.

What is your favourite thing about running workshops?

I really love sharing the skills that I have learnt with other people and it’s great seeing the look on someone's face when they get their code or their components to work.

What advice would you give to others who are just getting started in making?

I have learnt to be resilient and positive; not being afraid to try things. When faced with a new project, I find that it helps to focus on one bit a time and not to become overwhelmed. Don’t worry about doing things perfectly!

Our 'Meet The Maker' series aims to demystify the world of making. Throughout these blog posts, we'll interview people from different walks of life, from seasoned makers to those starting out, exploring creativity, resilience, and learning by making

Do you know somebody who we should feature? Leave us a comment or tweet us your suggestions and we'll get in touch with them!