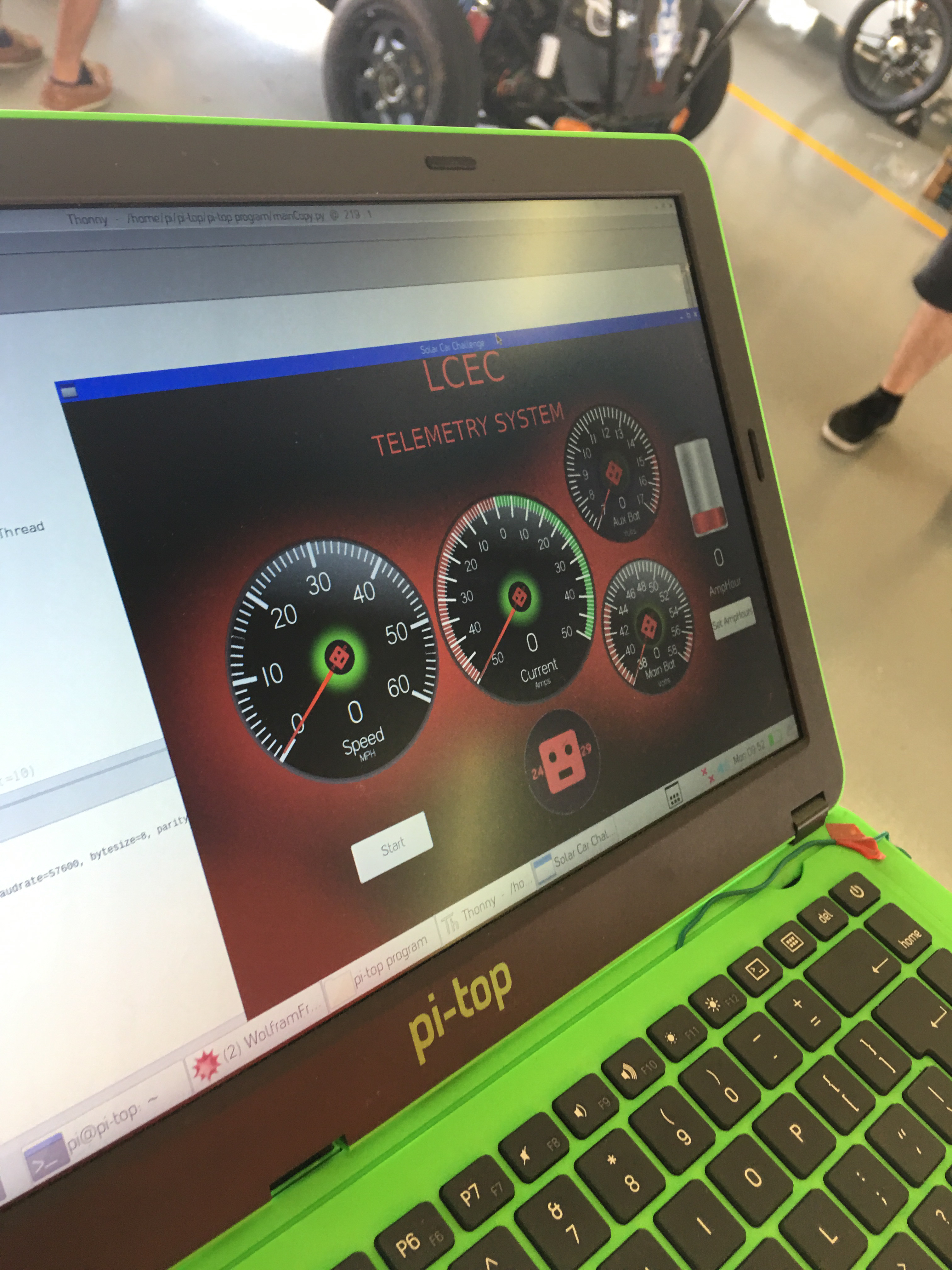 Vehicles from 30 US high schools arrived in Texas to take part in the 25th Solar Car Challenge race in the summer of 2018, each hoping to cover 1,300 miles from Fort Worth, Texas to Palmdale, California. An event like this combining learning by making, engineering and computers had pi-top written all over it - this year quite literally, as we decided to sponsor the race for the first time. However, we weren’t content just to put our logo on the race website, we wanted to figure out how we could really get involved.

So earlier in the year, some of pi-top’s engineering team met with the event organisers to throw some ideas around. What they came up with was inspired. “Historically the event had a strong hardware and electronics element, and though we love that, we wanted to add software into the mix too” says Wil Bennett, pi-top’s Lead Embedded Systems Engineer.

The pi-top team developed a full telemetry system, so racers and their support cars could analyse energy input and usage on their vehicles (visit the GitHub page to get the open-source code). “The cockpits of most cars are a bit cramped already, so we didn't want to make that worse by squeezing a pi-top in there. We decided to have some fun and throw together a custom circuit board to go in the solar cars instead” adds Wil. Called the pi-topHELIOS, the telemetry system can read the solar panel's power, battery level, auxiliary battery levels – almost anything the teams decided to measure during the race. They also threw a GPS in there too, so teams could measure speed, direction and distance. “Then we thought ‘wouldn’t it be cool to not only display all this to the driver but also send it to a pi-top in the support car’” adds Wil.

Despite all this complexity, the engineering team designed and produced the units from scratch in under a month. Crucially though, they made everything open source. “Teams can see the schematics, the parts we chose and why, and the whole idea was to make it open and encourage them to take it apart” says Wil. The system was further developed by one of the race’s adult engineering volunteers who added a graphical interface to show the data. This too was totally customisable - one team reprogrammed it with their team colours and logo! 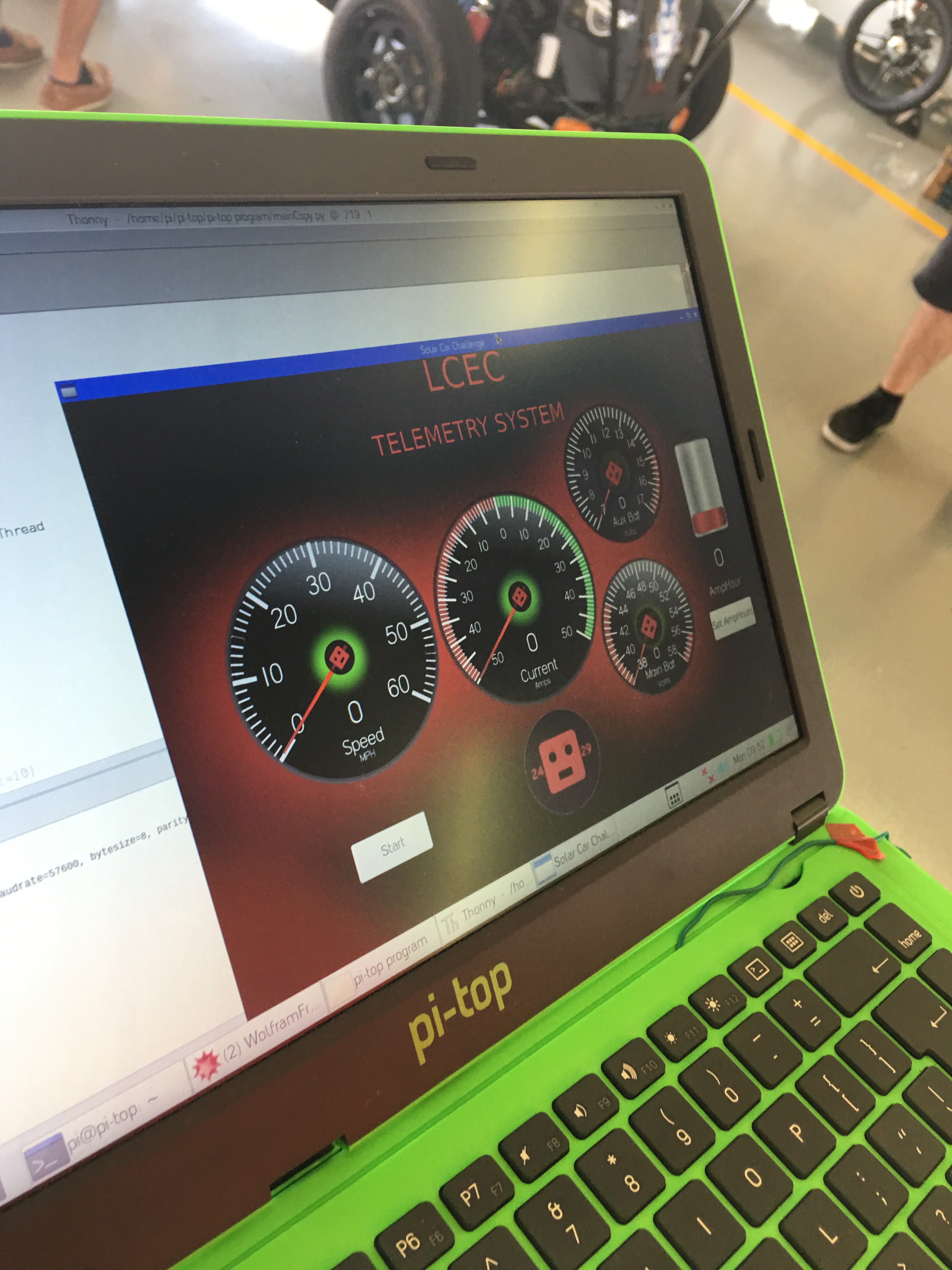 The telemetry proved itself in action. "All Saint's School noticed on their Helios board that their fully charged battery pack was showing less voltage than expected. They found the charge controller on their array was out of calibration, and the internal voltmeter was 3 volts off. So they got the charge controller fixed and are now getting a full charge, so Telemetry saved their race” says Jarrett Dunn, from the Solar Car Challenge Technology Team.

Jarrett also went on to talk about the power of the event in helping students develop important skills and experiences "I had a lot of great conversations with students this year, but one stands out. A particular student came from a school that didn't have a particularly strong technology program. They don't have a computer science curriculum and the solar car team was an extension of the automotive service curriculum. Here, he found something he really loved. I don't think I saw him without the pi-top in his hands the entire two weeks. He was asking great questions and wanted to go on to pursue programming in higher education.”

Despite the heat and distances involved, the units held up admirably, and pi-top’s involvement was a resounding success. “We worked on three main areas” says Wil. “Developing high-level application software for computers, low-level embedded software that talks to components like the radio and voltage meters and hardware, and the physical electronics hardware itself – schematics and PCBs. But crucially all of these were open source. We actively wanted teams to take them apart and adapt them. It’s what learning by making is all about”.

As for next year? Well, pi-top are hoping to be back stronger than ever. In the meantime, there are dozens of other uses for this technology. “The range of the transmitter is several miles, and can be tweaked to go even further, so you could attach this to all sorts of things like planes, weather balloons or rockets” says Wil. The sky’s the limit it seems!