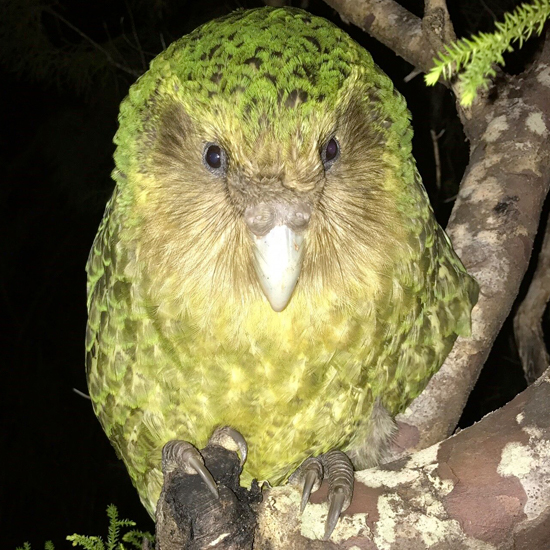 In the latest edition of our podcast, We Make The Future, we meet Dr Andrew Digby, who uses drone technology in his conservation work to save endangered birds.

New Zealand has the highest rate of endangered species on the planet, and its 93 different species of native birds are particularly at risk. Hoping to stop that is Dr Andrew Digby, who primarily works with two specific species, the kākāpō and the takahē.

Thanks to 60 million years of geographical isolation from predators, many birds in New Zealand lost the ability to fly. The arrival of the humans – first Polynesians and later European settlers –  introduced a host of non-native species such as rats, dogs, cats and stoats against which these native species had little defence. Add to this habitat loss and later climate change and it's clear to see why there are only around 140 kākāpō left in the wild.

Kākāpō are no longer found on the mainland, and now only survive on a handful of carefully managed islands that are predator free. It is here where Andrew and the team do their work.

And thanks to the Andrew's work, their nests are some of the most technology sophisticated ever seen. Each has an alarm system, a motion detector, and can transmit this data back to basecamp. Indeed, it is technology that is key to kākāpō monitoring and ultimate survival. Each bird is tagged with a transmitter, that not only records their movements and actions, but also acts like a key to release food from feeding stations, as well as weighing each individual bird to ensure they're healthy.

The other kind of AI

But perhaps the most interesting use of technology is in the artificial insemination breeding programme, and here, drones play a crucial part. Getting sperm from a male on one side of the island to a female on the other takes time, a lot of time. And in each minute that passes the quality of that sperm degrades. So now the team use a drone to fly samples across the island, and a journey that would have taken nearly two hours, takes just minutes.

As Andrew says in the podcast, 50 years ago conservationists used to walk around with a notebook and a pair of binoculars, and that was pretty much it. Today it's much more disciplinary, and needs people with a diverse skillset who can work together as a team. If that's not an example of the sort of change we're seeing in the Fourth Industrial Revolution, we don't know what is.

Conservation projects in the classroom

And so for teachers reading this, how do a few hundred endangered flightless birds relate to your class and to learning by making? Well, there are several projects and ideas in Andrew's story, and you don't need a kākāpō, you can use the fauna in your local environment.

One idea could be to design a smart bird table that logs when birds are feeding via a sensor. Another might be to design and make a 'trail camera' that remotely records animals movements. Even if you don't have the resources to do that, you could get involved with Zooniverse, the citizen science platform that lets anyone get involved with science projects.

No one else has kākāpō

The kākāpō story is a fascinating one, these birds can live for nearly 80-100 years, and have been on the earth a long time. There's even a LEGO Ideas campaign to make one in brick form. Furthermore, they are part of New Zealand's history and culture. And so I'll leave you with a quote from the late New Zealand conservationist, Don Merton,

"They are our national monuments. They are our Tower of London, our Arc de Triomphe, our pyramids. We don't have this ancient architecture that we can be proud of and swoon over in wonder, but what we do have is something that is far, far older than that. No one else has kiwi, no one else has kākāpō. They have been around for millions of years, if not thousands of millions of years. And once they are gone, they are gone forever. And it's up to us to make sure they never die out."