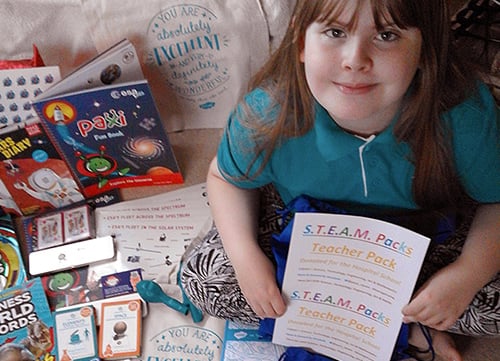 In this guest post, we find out how STEAM helps children in hospital not only keep learning, but also aid their recovery.

Annabelle has a very rare bone disease and suffers from chronic pain, there is no cure. To help her cope with this and express how she feels we make use of STEAM work as both a therapy and as an escape. To be able to lose yourself reading a book or making is a wonderful thing; it helps take your mind off the here and now of the hospital environment and sets it free.

Annabelle had been saving her pocket money and taking art and craft materials into the hospital with her when she went in for appointments and treatments, and she always shared these with all the children on the inpatient wards. She loves to read too, so she also bought little books too for the hospital libraries. Over time, Annabelle wanted to do more and make a STEAM Pack, after we visited New Scientist Live for the first time this year, she made a flyer up and handed it out to some of the stalls there that interested her. Some of them responded so well they actually donated items for the pack on the spot! They also gave her the biggest hugs too to say well done. This spurred her on to ask us to set up the @pack_steam twitter account and she agreed for her photo to go on there too, which for her is a big deal as she is the most modest and shy girl. But she wanted to show it was genuine and it was her promoting what she was trying to achieve.

Annabelle herself has had such a hard year with her health and hit rock bottom again at the start of the year, to the point she had given up on us, which was a crushing experience for all of us. We were offered support from the Local Play Specialists who helped Annabelle (and us) so much that she wanted to give something back to help them help other children too. That’s why we are making the STEAM Pack happen, as up until now we’ve not been able to find any Science/STEM things at any of the Wards we’ve stayed on. I get asked about where to get information from and as we use STEAM with Annabelle’s learning, it made sense to share it for the benefit of all those children who aren’t able to get out and about due to being in a hospital.

We’ve been out and about encouraging people to support their local hospital children’s ward, it doesn’t always have to be via the STEAM Pack, direct support with materials and books will always be welcomed. It is one of those things, everyone knows they are there, but until the boot is on the other foot you don’t consider the staff and children on the wards, if we can help make children happier it will also help their parents too; who are quite often dealing with very difficult emotions and circumstances.

STEAM as part of the healing process

But more than that, STEAM in hospitals can not only help emotionally, it can form part of the healing process. Some children suffer from respiratory issues, and part of their care might be to exercise their lungs and move their rib cage. They also need to get up and move about, which is quite often painful for them to do so. So, if we can get them chasing balloon-powered cars and rockets, blowing bubbles (to move their lungs and ribs), squeezing bubble wrap and stretching rubber bands, it’s all a form of physiotherapy (but they just don’t know it, because it’s fun!). Sometimes it’s the simple things that makes all the difference, what would your child rather be doing, sitting in bed or chasing balloons and bubbles?

It is wonderful to be able to walk in with a bag of joy, to start unpacking it in the central maker space and to watch all the children start to wander over, sit down and start chatting and laughing making crafts and art together. It breaks the ice and starts conversations, for the children and the parents too. Making the STEAM Pack is hard work and takes a lot of effort, but it doesn’t have to be on this scale. We encourage everyone, the next time you pop to the local hospital, drop off a book or a little craft pack for the children’s ward, it will make someone’s day.

Annabelle’s already planning more missions and she will top the packs up once they are delivered too; it’s not a one-off; she’ll take in donations every time we visit them. We’ve since heard that companies have seen her Twitter feed and been inspired to run science days for their local children’s wards or send in their own staff to take in their own packs. This is brilliant to hear, Annabelle is hoping her STEAM Pack idea will inspire others to donate to their local children’s hospital wards.

Annabelle’s packs will contain homemade tabletop experiments, bubble wands, educational packs on space and sciences, real Fossil boxes, AR cards donated by Augmentify-IT pads, pens, pencils, rubbers, full sets of Guinness World Records Books for the children’s Library…. You name it, it’s going in. The packs have been made even more amazing that we thought they could be, we’ve had huge support from the science community and the STFC have helped so much.

Children will react and respond to things they can get hold of and use, this is why we want to make the packs, to give them things to build and experiment with. To get things wrong and to try again, it motivates them to keep going if they can see the results in front of them. Some Children go through very tough times during their childhood due to poor health, if the packs can help in their own small way to help them cope with this then they’ve achieved what Annabelle set out to do.

When your child is ill, it puts things into sharp perspective. Normal life gets put on hold and turns into rounds of appointments, scans, tests, and treatments. You learn to appreciate the simple things in life and to pace yourselves, less really is more. Annabelle loves horticulture and grows native wildflowers, she’s kept the seeds from her mini meadows this year to share in her STEAM packs, and she hopes they will grow over the next few years to bring colour and wildlife to the gardens by the children’s wards. In the meantime, she’s busy saving her pennies again, and getting ready for her next mission, whilst still completing the current one!

Sharing is caring, so if you can help put the TEAM into STEAM and support your Local Children’s Ward please do, they’ll be glad to see you!

If you can help support Annabelle's project in any way, reach out to her mum via Twitter or get in touch with the team here at pi-top and we can connect you. There's a PDF explaining the sorts of materials she needs here.