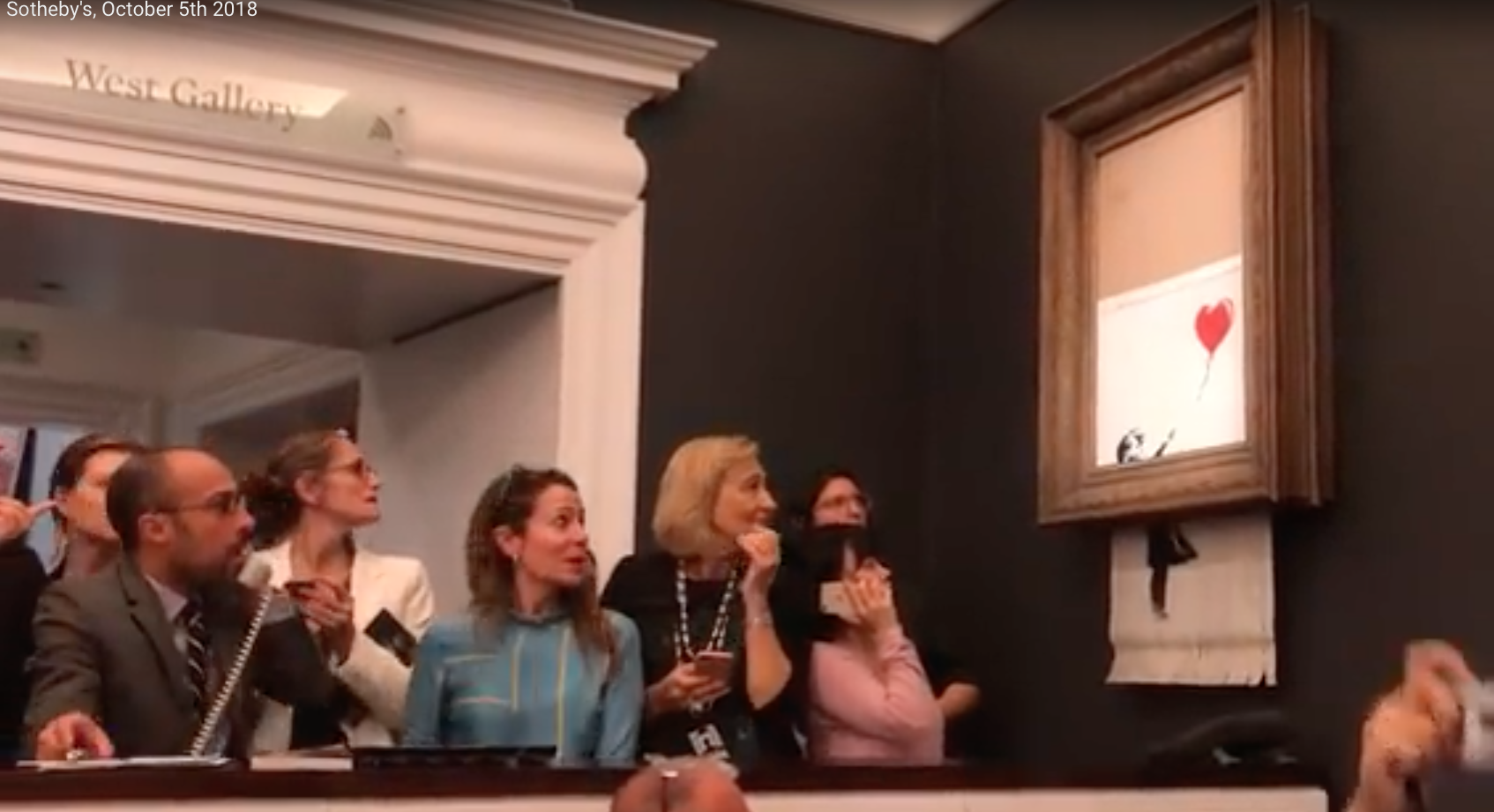 As a piece of publicity, you’ve got to admire it. Sell a painting for £1m and as the auctioneer's gavel hits the mahogany woodwork of Sotheby’s, half shred it before the world’s media. Not since the K Foundation burnt a million quid in a Scottish cottage has pop culture gone so mustang with moola.

It was an action that some are claiming instantly makes the artwork more valuable. LinkedIn's senior editor-at-large, Isabelle Roughol, said "had Banksy really wanted to destroy the art, they should have literally made it go up in flames. This did not destroy the art, it completed it — and increased its retail value significantly. Brilliant move it is, punk move it is not.”

Jonathan Jones in the Guardian believes "what happened at Sotheby’s is Banksy’s greatest work. He has said something that needed to be said: art is being choked to death by money. The market turns imagination into an investment and protest into decor for some oligarch’s house. The only real rebellion left is for works of art to destroy themselves the moment they are sold.”

Yet as news of Banksy’s art-stunt spread, he released a further video reportedly teasing how he constructed the frame. And it’s this video, that peeked the interest of the maker community, who immediately set about figuring out how he did it rather than why.

So, I have a theory about that Banksy shredded girl w/the red balloon:

Banksy is by no means the first person to produce auto-destructive art, but the idea of something self-destructing after a single use is interesting as an idea to explore in a maker space.

A machine or device that when activated, performs a specific function and then inhibits or destroys itself after that function would make an interesting theme to build projects around, and it’s easy to imagine some real-world possibilities for this.

One time use devices might ensure security or facilitate access, or be designed so it can’t be shared. An example of this is the one-time use syringe. The re-use of syringes leads to more than two million people being infected with diseases including HIV and hepatitis each year according to the WHO, in cases involving either drug addicts or worse, unlicensed doctors.

This Tape will Self Destruct from Diego Trujillo Pisanty on Vimeo.

In 2014 UK photographer Diego Trujillo Pisanty created a printer that would have each page spontaneously combust after 60 seconds. He explains how and why he built it in an interview with Vice.com. Artist Thijs Rijkers produced various ‘suicide machines’ as part of his work, here’s a saw sawing itself in half. Or here’s a chair that self-destructs after eight people have sat on it.

Computer security experts say that one-time programs are a hugely important tool in cybersecurity. Or they would be, if anybody could build them.

It’s not just hardware and artworks that self-destruct, a one-time use algorithm would be hugely useful in cryptology and other uses. At the most simple level, here's a Python script that shreds itself when run. Finally, there’s just the fun stuff. Someone’s written a widget for Amazon’s Alexa that lets you give it Star Trek style self-destruct orders.