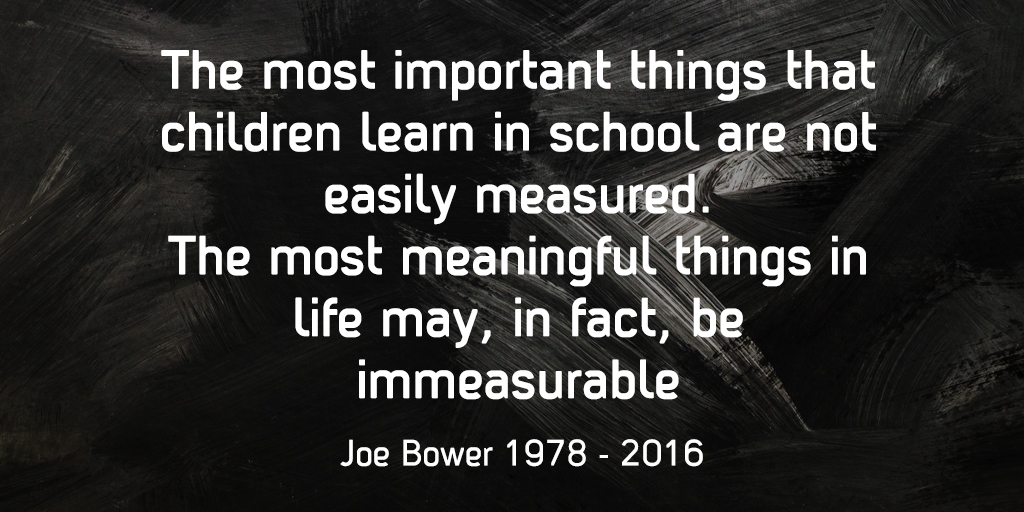 October 5th marks World Teachers’ Day, where people celebrate the millions of teachers around the world. But we’ve chosen to celebrate just one…

Joe Bower probably hadn’t even heard of pi-top when he tragically died in 2016 aged just 37, let alone used one. But Joe believed in what we believe in; project-based learning, learning by making and in finding something better than the assessment and grading of our children in school.

So this World Teachers’ Day, we’ve asked Joe's best friend and fellow teacher, Kelly Aleman, to tell us about Joe’s beliefs, his work, and to celebrate his life as a teacher.

In 2001 I was transferred to West Park Middle School, Alberta, where Joe worked. At that time, Joe was a fairly typical teacher, doing standardised tests and grading assignments. Back then, he didn’t have any progressive views on education, but then nor did I. But the first introduction to him thinking differently, was when he went and saw a presentation by Alfie Kohn, that was the beginning of his journey.

Joe was a farmer, he helped his dad run the family farm. He would often say when things were getting hot around him ‘well if teaching doesn’t work out, I’ll go farm’. As a kid, Joe was in a tiered class around 6th grade, and for the rest of his life, he used that as a fuel for why he didn’t agree with streaming by ability. He played baseball and hockey, just your average guy, but he was deeply committed to education.

He did things that he thought were right, come Hell or high water. He didn't always care about the effect on adults because he was so child-centred. He was a man of full integrity, and he didn’t just do it based on his gut, he was also highly researched, always reading. And he was always ready to get into a tangle with someone else about what he believed, it didn’t matter if you were the Minister of Education or a colleague, he was always ready to discuss.

Some people didn’t like to engage with this as he’d just take them apart. But as I’ve reflected on his nature now, the success of his blog and his views were down to the fact he was speaking from his heart and speaking like he normally spoke every day. There are a lot of people writing about education and anti-standardisation, but there was something in Joe's words that rang through as authentic.

(Watch Joe give a keynote on education in 2014)

Motivation was a big thing for Joe, I remember we went to a presentation by Dan Pink, who wrote Drive, and from there we began looking at what doesn’t motivate kids, and that led us to confront standardisation and assessment. He was a guy, like me, from a very traditional education background. But our guts told us this wasn’t right, we knew it wasn’t. And when we started reading these books, we’d say ‘damn, this is what we were feeling all along’.

Whereas other people might be nervous about giving it a go and getting in trouble with their colleagues or administration, Joe was like ‘well shit, let’s do it’. And so we didn’t do grading and challenged things like awards, and how rewards don’t do things for kids. As soon as he knew what was right, he was like ‘I’m doing this, and I DARE you to come in and tell me not to’. It wasn’t always easy. If a parent came in and said ‘why aren’t you grading my kid?’ He was always up for the conversation, explain why he did what he did, and swing people around.

I see Joe's legacy as someone who started the conversation here in Alberta. My own daughter is now in a teacher prep programme, and things Joe and I discussed are now taught in her university classes, that did not happen before. That wasn’t all Joe, but he certainly helped influence that. But I feel we still have a long way to go in the area of standardisation, and he despised Pearson, as I do, and everything that comes with. The fight is still alive, it’s just a little less fiery in my world now that Joe’s no longer with us. He wasn’t just a colleague, he was the best friend I ever had.

Perhaps Joe's views on assessment are best summed up by one of his last tweets...