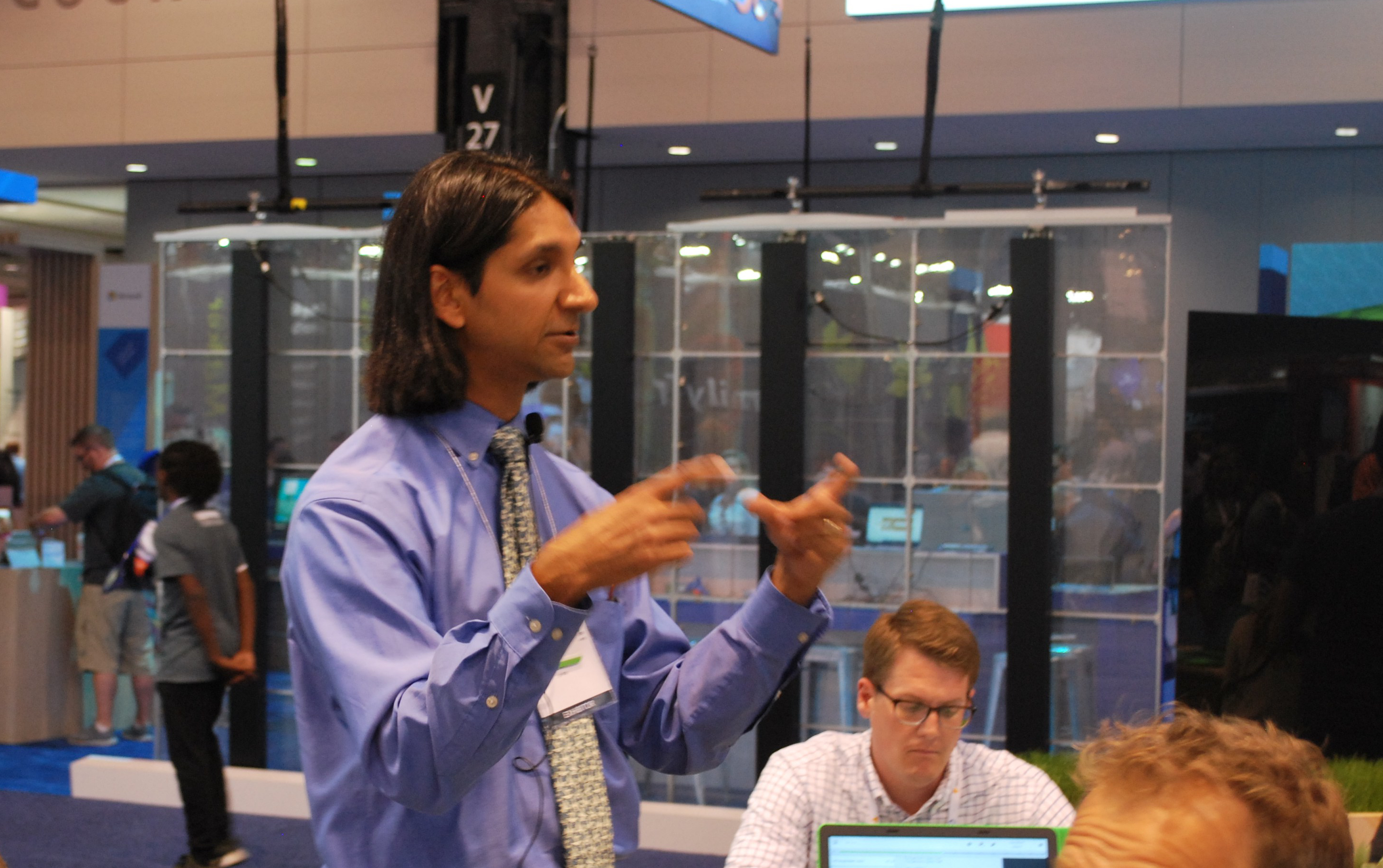 Neil Mittal is a teacher at All Saints’ Episcopal School, Texas, USA. He’s also a pi-top champion. In this article, he tells us how he deployed pi-top to not only improve the learning experiences of students but also to get the entire school staff onboard too.

All Saints has about 1,000 students, 400 of which are in the high school, and the rest go from extended care all the way up through 12th grade. So we’ve got a full range, which means that we have an opportunity for a strong vertical alignment.

The school has a long history of athletics and arts, but not educational technology. We have after school activities of course, but nothing really organised in a curricular sense such as programming courses.

We have used technology in our lower school, but that’s mostly just learning how to do web searches and using the computer. Our middle school has an opportunity to do some basic robotics, and our upper school kids really have an educational experience in technology with the solar car team, which is a great engineering program but just a small subset of that is programming, and they come into that with little or no experience which hampers their development. 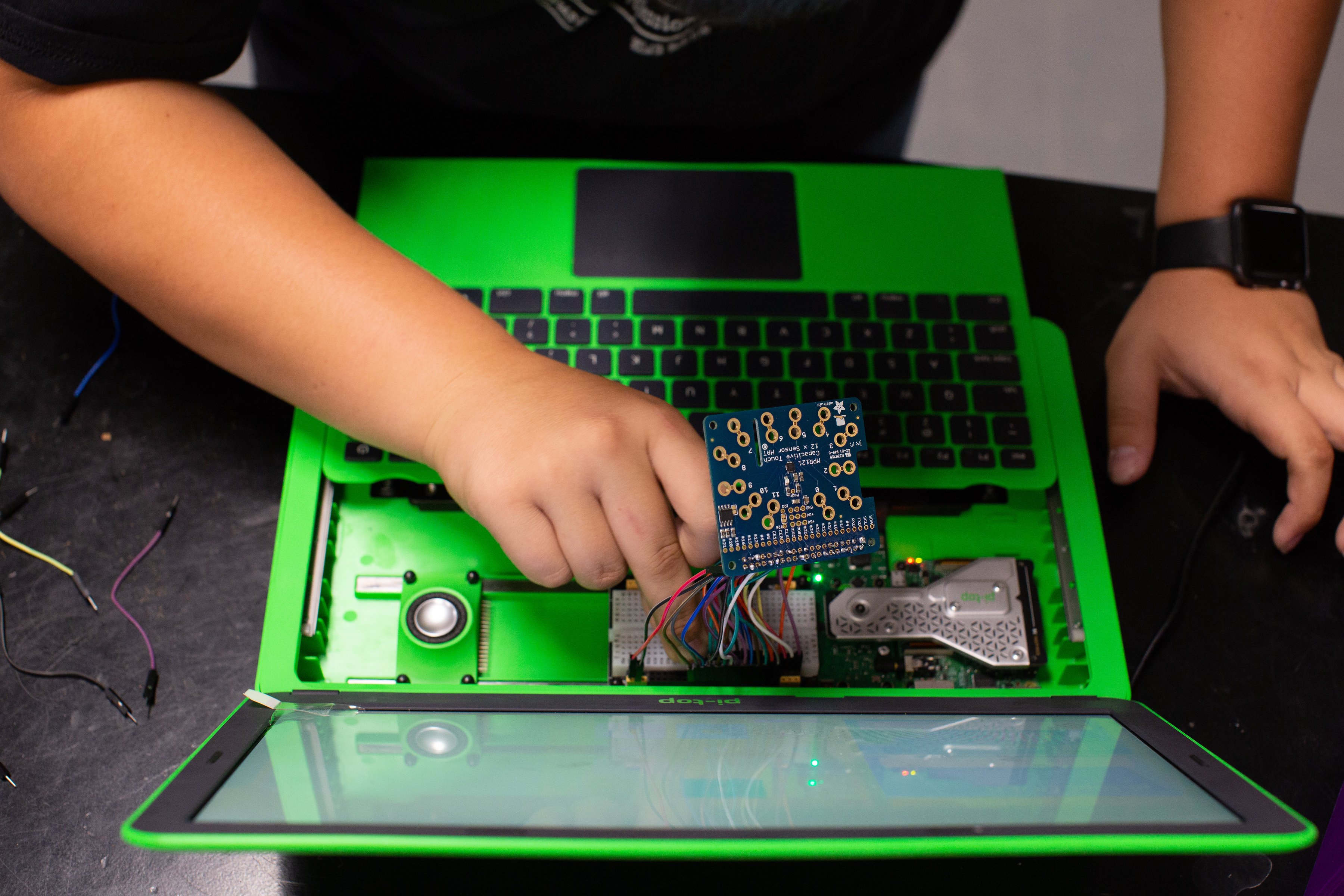 We began with a 10-week pilot program, where we were doing the Phase 1 curriculum – ‘do, try, and play’. Attending were a couple of middle school students who’d never programmed before and about 15 to 16 upper school students. So that’s high school, nine through 12, many of which were involved in the solar car team, but then we started to bring in a number of kids beyond that group.

Our male to female ratio was actually quite good. We had about three to four girls to 14 to 15 boys. Now, I’ve been teaching computer science for over 10 years, at the AP level and at the non-AP level, and I can tell you that ratio is hard to come by for me, even when I’ve reached out individually to students whom I know are capable, but they just don’t see themselves in that kind of class. So to get this kind of ratio going, and consistent, was very promising to me.

The initial group that we had in technology, at least at our school, were the very high achieving students who are already in advanced placement courses, taking advanced math and science courses, and this was another thing for them to add on to. Even though those were the students that started initially with this project, by the end of it we were bringing in some regular level students who had experience with automotive technology or carpentry. They just saw it as another way for them to build, and it added a dimension to what they already liked to do. So this kind of experience was something that they may not have seen if it was just a computer science class.

Our students were meeting after school, before school, during their study halls. They developed this commitment to do it on their own, once they started in with the initial lessons.

Our meeting times were varied because we were beta testing the curriculum essentially, which we were very appreciative for, but that means our students were meeting after school, before school, during their study halls. They developed this commitment to do it on their own, once they started in with the initial lessons. And that’s where asynchronous learning became really important, because as they got ahead they became helpers for students who showed up later, or they became helpers for students who were struggling in other parts of the project.

So, after we did this we had three levels of outcomes. We had the student level, the faculty level and the administrative level. The student level of outcomes were amazing. Students who’d never programmed before all of a sudden had a basic understanding of variable use, some simple data structures, Boolean operators, and loops, along with the components that came with the Inventor’s Kit.

The projects that they were developing not only gave them the low floor to enter in, and the high ceiling to expand on, it also gave them the wide berth of projects to go into, some of which none of us expected them to find. I think all but one student finished all of the lessons that were provided.

Another fun part was that the faculty had to get together and figure things out beforehand, because we had faculty who’d never programmed before. Our science teachers had never programmed before, though they were great at solar car and engineering. Our middle school teacher was just learning how to program, and this gave him a big leg up on understanding and implementing this.

So our faculty got to cooperate in a way that they didn’t initially expect to, and it was a great resource-sharing opportunity for the engineers and the science department to work with us on the coding end to understand how all the projects were going to work out, and to solve problems as we had them.

The collaboration that happened within the students was wonderful, because when they finished the initial lessons, then they were able to talk to each other about what it is that they came up with, and then if they had problems they could talk to each other and share, solve the problems at the same time, and improve their communication skills which is one of the great promises of extreme programming, right? When we talk about decoding and debugging and software development, we want that level of communication in our students. 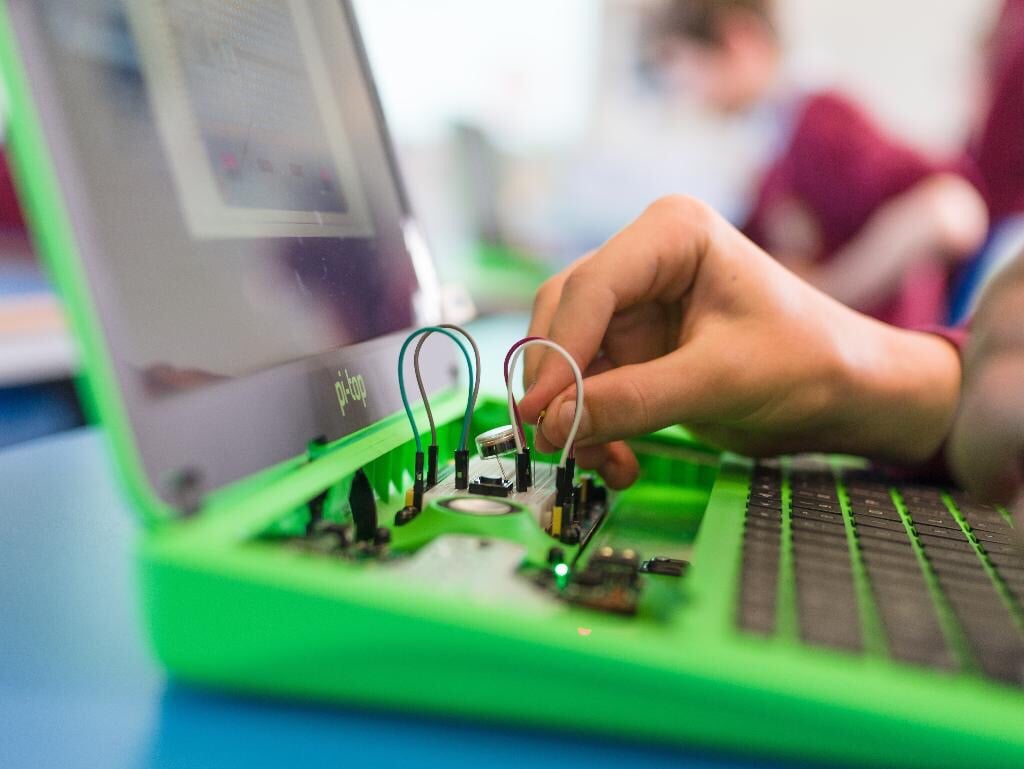 At the end of it, they had a better foundation with Python, but if you played with this a little, right now you’re seeing the interface with Python, but for those of you who use Scratch, you can do all the same projects in Scratch that we do in Python, and you can even go into the BlueJ if you’re teaching Java and import the libraries and teach all the same lessons using Java. So the three programming platforms that you as an educator have. And if you want to have that teaching your students moving between, so if you have one student or a couple of students who finish one project in one language, send them to a different language to do the same thing so they understand how the functions are based in a similar way, and the languages are not so different. It makes them better programmers.

pi-top for headteachers and superintendents

The next part is for me the most promising, and that is the administrative awareness. After our headmaster, who’s essentially our superintendent, saw what our students and our faculty were doing, he came to us and said, “When can the elementary school and middle school kids start using this?"

Real projects in the classroom examples

One of our 8th grade students, he was an exchange student, was rather under-challenged in our regular classes, so he opted in. He finished the lessons within the first two weeks, he went and saw that we used the Sonic Pi library for some of the projects. So he went straight to Sonic Pi and he found a piece of music that he enjoyed a lot, and he spent the weekend finding the sheet music, transferring that into the Ruby code that goes into Sonic Pi, and creating the entire song again.

And that was something that none of us anticipated. We thought he was going to stick more with the components and the projects, but it gave us a lateral width that we didn’t expect that was going to happen from that. So that was a fantastic outcome right away, and it wasn’t strictly a programming thing. It was his art, his music that he loved that he wanted to bring in with his technology experience.

One of our 9th grade students, and I’m excited about this because these are both young students, that means that we can keep them for a few years in the programming and educational track. He wanted to make a one-player game to start, but the thing that became most interesting for both he and I was he had to learn how to do file reading and writing, which again is not in the curriculum that’s there, so he had to dig into the libraries to really find out not only how to write and read a file but how to overwrite a file. So all of that learning happened on their own after they finished Phase 1. 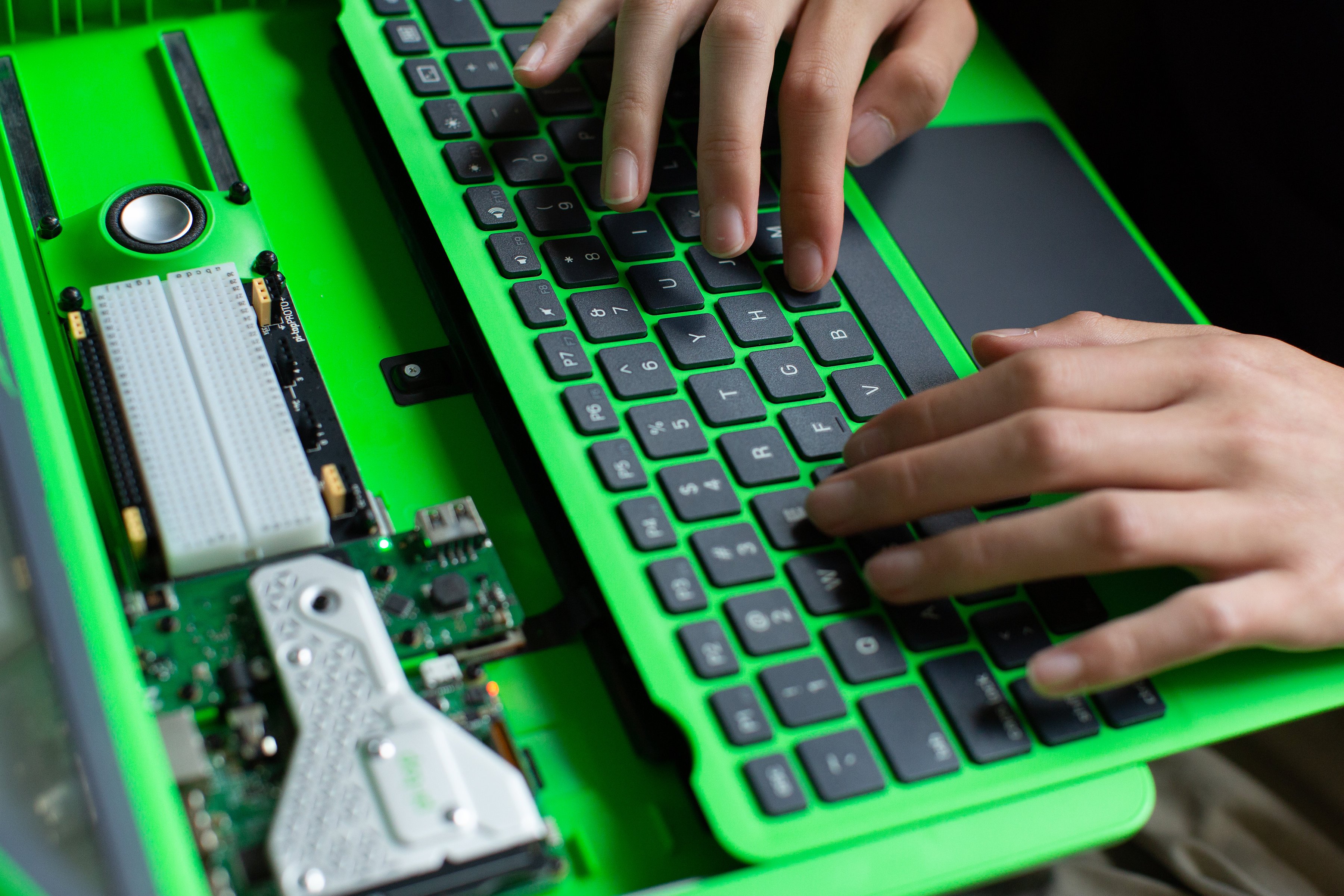 A lot less mess with pi-top

From my own experience prior to this, just working with the Raspberry Pi, my bet is your desk was…I think we called it glorious chaos earlier today. There are wires everywhere, there are components everywhere. From our students’ standpoint, it was so much nicer to have everything in the pi-top’s workspace. If you pull down the keyboard you see your proto-board there, all your components stay in there while you’re working on your project – there’s less mess!

It also streamlined that experience for them and made it less scary for them to interact with the parts, put them all together and have a good learning experience where we weren’t necessarily hovering over them or expecting them. They were exploring it, they were making mistakes, they were talking to each other.

This article is an abridged transcript of a presentation given at ISTE2018. Neil Mittal is a teacher at All Saints’ Episcopal School, Texas, USA. He’s also a pi-top champion.